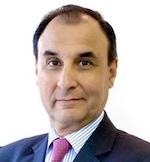 Varun was previously a Managing Director and Head of the Private Capital Asia (PCA) Group at JP Morgan in Hong Kong. He started his career at McKinsey and Company (NY) and also was formerly a Director of Investment Banking at CS First Boston (NY) and a Director at the Asian Infrastructure Fund (HK).